I love going to the movies. Who doesn’t, really? In the past month I’ve seen Cloud Atlas, Argo, Lincoln, and this weekend, Life of Pi. (Does it seem like I’m bragging? I kind of am. MOVIES!) Good times all around. I’ve thoroughly enjoyed myself watching each film. But you know what sometimes sucks about going to the movies? The snacks. Here’s why:

1) They all cost about 8 million dollars per snack choice.

3) They aren’t filling, because they are filled with empty calories.

4) They are so oversized that if you are hangry, you might find yourself snarfing the whole box of candy or jumbo sized popcorn that has about 8 million calories per bag (again with the 8 million–it’s a standard movie number). After hanger snarfing is over, you’ll find yourself in a shame spiral that will ruin the whole movie for you. I say it will ruin the whole movie for you because let’s be honest, the previews are 22 minutes long–I’ve timed–and you will want to squelch your hanger ASAP so you’ll snarf pre-movie. Then you’ll realize you snarfed 8 million calories when you promised yourself that you wouldn’t finish the whole “thing” yourself…But you did anyway, hence, movie isn’t as enjoyable. That’s no fun. No fun at all.

If you’re reading this blog you’re most likely health conscious, so I’m sure you’re privy to what you should do to healthfully movie snack. You know, make sure you go to the theater with a full belly so you’re not tempted to eat the calorie laden movie popcorn or jumbo box of M&M’s; bring a healthy snack with you (almonds or a granola bar, anyone?); buy the water instead of the soda; yada, yada, yada. But what if you want a little chocolate treat to enjoy because hey, the movies are fun and it’s a tradition to un-healthy snack whilst watching? This weekend, I discovered a way you can get around the healthy snack rules without guilt commencing, for only $1: 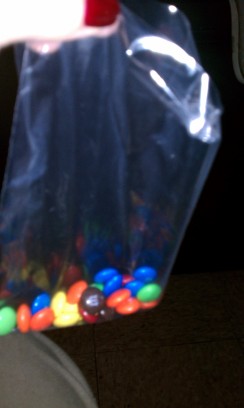 Have you ever seen those big candy dispensers in the movie theater lobby? Well, what I learned is that they have these little plastic bags hooked onto the side of the dispensers (pictured above), so you can spend a buck (50 cents per spin) on a bit of candy that won’t melt in your hand (let’s face it, M&M’s melt in your hand regardless of their claim) and won’t cause you to over-snarf. This Saturday, I didn’t need a huge bag of candy, I just wanted a little bit to satisfy my craving. And satisfy I did. I did follow the “never go to the movie theater hungry” rule because I didn’t want hanger to ruin it for me, but I was able to eat a little treat without the “I’ve overindulged” guilt.  I also shared this bit of  said candy with my boyfriend. This girl is not selfish (except when hangry).

GO FORTH TO THE MOVIES IN UN-HANGER AND $1 CHOCOLATE ENJOYMENT!

I’m hangry as I write.  So hanger, in its inimitably hostile way, is going to put an interesting spin on today’s topic, which is kale.  When seasoned and baked, the leaves of kale (also known as borecole) are transformed into a delicious, healthy alternative to salty, greasy, fat-fried potato chips.  Granted, who doesn’t love strapping on a feedbag full of BBQ kettle chips?  I do.  Intensely.  That’s why I need to take a moment to remind myself of the important differences between Bad Chips and Nice Chips:

The choice is a no-brainer, isn’t it?  Assuming that this comparative view has, in the very least, convinced you to give kale a chance, here’s the best way to make your own chips:

The key with kale chips is to remove them from the oven at precisely the right moment – it’s too easy to burn these little, ugly darlings.

Here’s the best part of the kale story: eat all you want.  For those of us who recoil at the mere suggestion of “moderation,” kale chips are a godsend.  These chips are actually good for you.  And they won’t chip away at your self-esteem or try to seduce other ladies with glossy packaging and fancy flavors.    Bon appétit!

Of LSD, George Harrison* said, “The first time I took it, it just blew everything away. I had such an incredible feeling of well-being… It changed me and there was no way back to what I was before.”

Sing it George.  I know that feeling.  I experience it every time I consume a substance that is, arguably, even more addictive than LSD.  You know it as “spaghetti.” I know it as nirvana.  It also happens to be the most satisfyingly delicious way to eradicate hanger.

Unfortunately, spaghetti is also the most satisfying delicious way to pack on pounds.  As much as I love it and wish to roll around in it like Mena Suvari on a bed of rose petals, I’d rather not look like a competitor on “America’s Next Top Sumo Wrestler.”

That’s why it excites me to no end to emerge from my hangry chicks hiatus with news (to me) of a superfood so exquisite that I could barely put my fork down long enough to write this post: spaghetti squash (cue the choir of angels).  This gourd is God’s gift to carb junkies: its flesh is long and thin like spaghetti, and its taste is strongly reminiscent of its higher calorie rival.  That’s where the similarities end.  Check out the differences:

As the numbers show, you could eat spaghetti squash until it’s oozing from your ears without feeling a) guilty or b) fatter than Honey Boo Boo.

Here me now and believe me later: Do yourself and your body a huge favor and follow this recipe before you tell me that I’m full of sh*t. 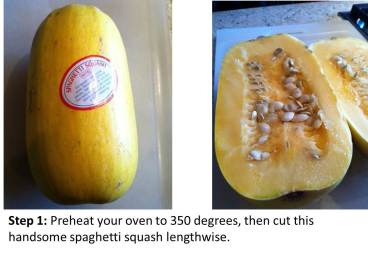 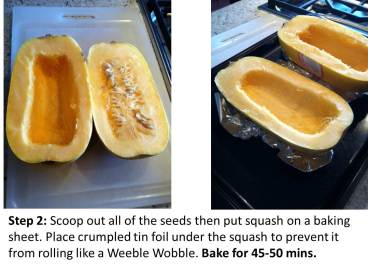 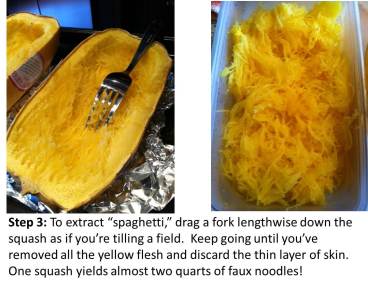 Give this gourd a shot.  And if you disagree with me about its ability to satisfy your spaghetti craving, then I’ll reimburse you for your squash.  No questions asked.

I need to end with a note of caution: Because this dish takes almost an hour to prepare and bake, I highly recommend preparing it long before you start getting hangry.  It keeps well in the refrigerator and can be reheated in the microwave in a matter of seconds.  For the safety of you and your loved ones, never try preparing this dish when your hanger is a 5 or more.

*Millennial readers, George Harrison was in a little band called The Beatles.